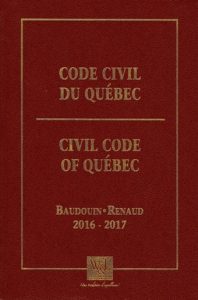 Aka the ‘Red Book’ with all the answers

Theory Behind the Program

COMMON LAW AND CIVIL LAW are two of the main legal systems in the world. Ironically, civil law is commoner than common law. Civil law started with Roman law, which developed from the Twelve Tables around 449 BCE. In 529 CE, the Byzantine Emperor Justinian I compiled Roman law into the Code of Justinian. This was the inspiration behind the Napoleonic Code, which was completed in 1804, after which all civil codes today are modelled.

Proof civil code is supposed to be programmable can be found in the writings of Jean-Étienne-Marie Portalis, one of the four architects of the Napoleonic Code. Portalis writes that the art of civil law is to simplify everything while predicting everything (“le grand art est de tout simplifier en prévoyant tout,” p. 15). He says the purpose of law is to establish “general maxims” that produce “fecund consequences” rather than delving into the inscrutable minutiae of everyday matters (p. 17). See Jean-Étienne-Marie Portalis, Discours préliminaire du premier projet de Code civil (1801).

Thus, while civil law doesn’t have to be exact with regard to micromanagement, it has to be functional (and beneficial or “fecund”) on a macro scale. The point at any rate is that it should be possible to program and simulate a civil code, including the Civil Code of Quebec. If this is not possible, it would not be a failure of computer logic but of civil law itself based on its own philosophy or claims of what it is supposed to be and do.

Significance of the Program

The production or failure to produce a civil computer code has significance beyond its mere utility. Since the production of a civil computer code represents a crucial experiment in civil law, the success or failure of the project could have tremendous intellectual ramifications on civil law theory comparable to the Turing test in computer science and mathematics. For instance, it could point to the argument that an empirical system of law, like common law, is a more realistic, functional or organic system or theory of legislation. Politically, it could prove that the Republic, as envisioned by French revolutionist thinkers, is a lie, which could open to new kinds of thinking. Conversely, the successful production of a civil computer code could demonstrate the opposite about common law and lead to a new paradigm of computer code legislation.

Like the popular 19th c. parlour game Twenty Questions (aka 20Q) the program is a translation of the categories the Civil Code of Quebec (CCQ) into a series of questions that identify the specific article that applies to the user’s situation, whence the name of the program: 20QCCQ. The program is basically just a digital translation of how the civil code is supposed to work as an analog device, viz. the civil lawyer asks the client/user a series of questions to identify a specific article in the code.

Given the civil code’s (and more generally, civil law’s) precise form of legal reasoning and system of categorization, there should be as many questions as headings, leading to the precise article in point. To the extent that some legal answers aren’t followed and some legal questions aren’t answerable, at least in general terms, the code may be said to fail Portalis’ criterion that it should predict everything, at least in general terms, which could help to complete or improve the code.

Coding common law this way is more difficult or impossible, since most of the common law is made up by judges and changes from time to time. Unlike civil law, which follows a precise form of reasoning and is neatly organized and categorized, the common law is more like a constantly evolving mess that lawyers just adapt to.