The Inuit (“the people”) are a group of culturally similar indigenous peoples inhabiting the Arctic regions of Greenland and Alaska. Inuit languages are part of the Eskimo-Aleut family. In Canada and the US, ethnic Europeans commonly called the Inuit and Siberia’s and Alaska’s Yupik and Iñupiat peoples “Eskimos.” However, the Inuit consider this term derogatory. Some writers suggest it is a corruption of the Cree askamiciw (“he eats it raw”) or askipiw (“eaters of raw meat”).

Sections 25 and 35 of the Constitution Act, 1982 classify the Inuit as a distinctive group of aboriginal Canadians who are not included under either the First Nations or the Métis. The Table below shows the distribution of Inuit populations in Canada and the US.

The Inuit live throughout most of Alaska, Greenland, Siberia and northern Canada, particularly:

These areas are known in the Inuktitut language as the “Inuit Nunangat.”

In the United States, the Iñupiat live primarily on the Alaska North Slope and on Little Diomede Island. The Greenlandic Inuit are descendants of ancient indigenous migrations from Canada, as these people migrated to the east through the continent. They are citizens of Denmark, although not of the European Union.

Distribution of Inuit peoples and dialects 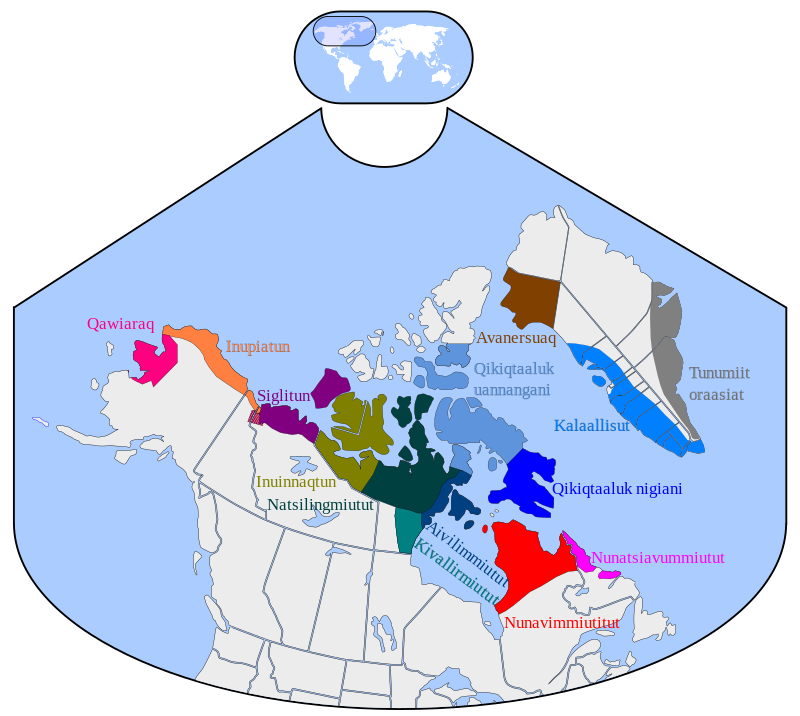 Like the Nisga’a, the Inuit are implementing their legal traditions in a contemporary context as a result of their land claims agreement and powers of public governance in Canada’s newest territory, Nunavut. Nunavut was separated officially from the Northwest Territories on April 1, 1999 via the Nunavut Act and the Nunavut Land Claims Agreement Act, though the boundaries had been drawn in 1993. 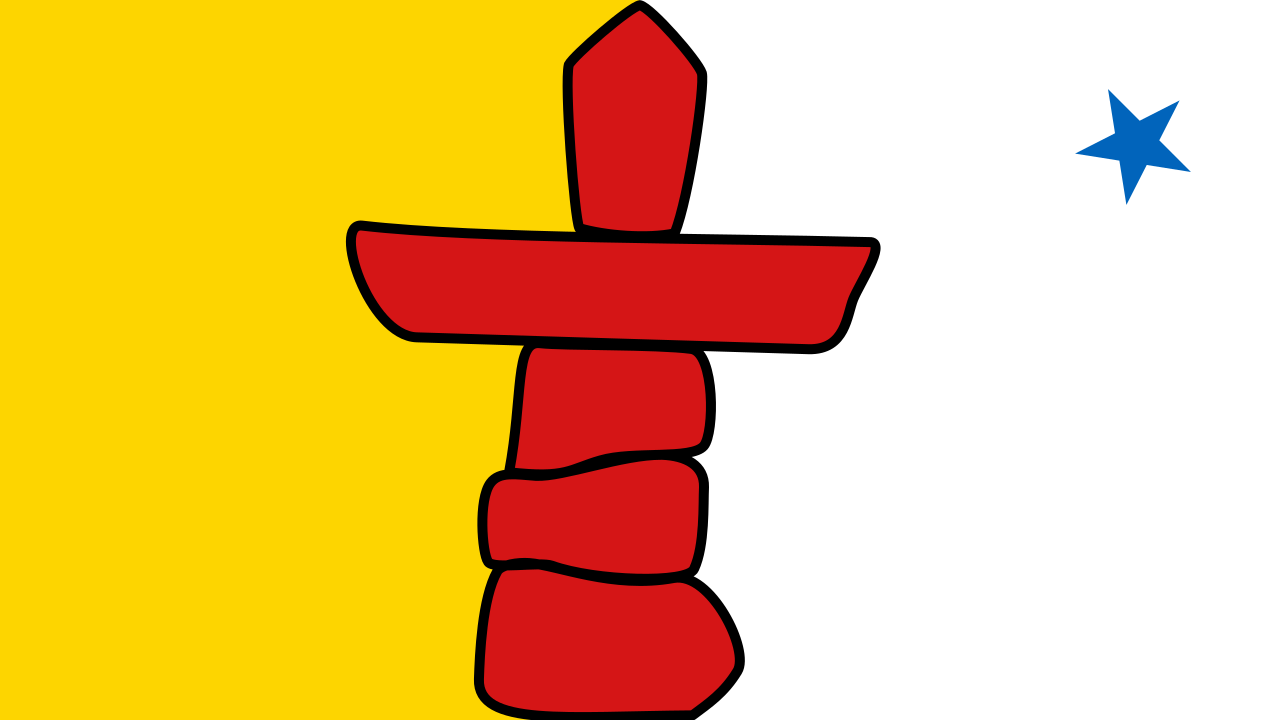 Today, the Nunavut Territorial Government is one of the most important institutions implementing Inuit legal traditions in Canada. The government has taken great guidance from Inuit legal traditions (qaujimajatuqangit) to structure its legislative and administrative agenda and actions. For example, the Nunavut Integrity Act integrates qaujimajatuqangit into its process and substance for dealing with conflicts of interest.

At the opening of the 2004 session, there were constant references to Inuit legal traditions in the legislature. Inuit legal procedures are also evident in the functioning of the executive. There are no political parties at the territorial level. The Cabinet operates on the basis of consensus politics.

Inuit legal traditions (qaujimajatuqangit) “includes unwritten traditional knowledge, family and political structures, learning, social development schemes, and even the understanding of local weather patterns.” It has also been described as a living technology for rationalizing thought and action, organizing tasks, resources, family and society into a coherent whole.

Concepts under qaujimajatuqangit include the following.

Maligait refers to things that have to be followed. It is a relational term focusing on the result of a request (the obligation to obey).

Piqujait deals with things that have to be done. The obligation that is the focus of piqujait is the wish of an authorized person about something that is to be done.

Tirigusuusiit refers to things that have to be avoided. If a person transgresses tirigusuusiit, they will face consequences from their actions. These legal traditions are of ancient origin but have potential application to present circumstances. Examples of tirigusuusiit among qallunaat (non-Inuit) are not working on Sundays.  Inuit Elder Aupilaarjuk remarks:

[B]ecause they are a part of Inuit ukpirusuusiit, some people think [tirigusuusiit] are no good and come from Satan. We are wrong to think like that. What we are following today is wrong and people are killing themselves. Inuit weren’t like that before. We have to look at where we came from and where we are today.

Examples of tirigusuusiit include cleaning campsites out of respect for the land and animals, not leaving dirty fish around the house and not dumping garbage into the river.

Other concepts under qaujimajatuqangit include the following:

Lifestyle and Division of Labour

The Inuit are traditionally nomadic peoples and hunter-gatherers. Men are hunters and fishermen and women take care of children, clean the home, sew, process food and cook.

The basic units of traditional Inuit society are the family (the camp or household) and the larger community. The community consists of a group of families who share a place where they winter. Goods are shared within a household and with the community to a significant extent.

Marriage and Coming of Age

Inuits traditionally practice monogamy or polygyny. Divorce and remarriage are permissible with the approval of the community, particularly the elders. The family or community often arrange the marriage, sometimes in infancy. Marriages, while formal, are not ceremonious. Women are married at puberty (menarche) and men when they become productive hunters. Women receive little sex education prior to puberty and marriage. As a result, it is not uncommon for young women to stay in bed at menarche, believing they are sick or different. When her mother finds out, she teaches daughter menstruation practices and the community is informed that the daughter has reached puberty.

Practices during menstruation include:

Women abide by a number of rules during menstruation, some of which are considered taboo if not followed. For example, using a man’s garment for a sanitary pad could prevent the woman from finding a husband.

Women are married, if they are not already married, when they reach puberty and discouraged from having sex during puberty, between ages 11 and 13, until they reach the “prime maternity age” at about 15.

Most Inuit oral traditions include stories of raids by other indigenous peoples, including other Inuits, and taking vengeance against them. In 1771, Samuel Hearne witnessed ethnic feuds in northern Canada between the Dene and Inuit. In 1996, Dene and Inuit representatives participated in a healing ceremony to reconcile the centuries-old grievances. Historic accounts of violence show there was conflict among Inuits and with other cultures. It also shows they are historic people and formed confederations, usually to defend against a stronger nation. By contrast, people who lived in less productive geographical areas tended to be less bellicose, as they spent more time harvesting food.

Justice in Inuit cultures was moderated by elders, who made most governing decisions. Some serious crimes against the community or individual were capitally punished.

The Inuits are famous for being one of the hardiest people on the planet and living in one of the most challenging environments. However, this also frequently involved tragic situations. For instance, Inuits are known to practice what some European anthropologists have called suicide, senicide, femicide or infanticide. These designations, however, are inaccurate, as there is no evidence that Inuits customarily killed their young, women or elderly out of cold blood, but rather out of a need to survive.

The death of children and elders is a tragedy, since Inuits highly value elders for their knowledge and wisdom and give special care to pregnant mothers. A complex system of rules and taboos (pittailiniq) ensures the mother is well taken care of, fed and rested during pregnancy. To prevent miscarriage, the husband and camp make sure the pregnant woman does not become stressed or exhausted. For instance, the terms sailliq and sailliqtuq distinguish between pregnant women who relax appropriately (sailliq) and those who relax too much (sailliqtuq). Other pittailiniq require a husband not to get angry with his wife during the pregnancy. A woman who miscarries is expected to inform her mother and the camp forthwith, since Inuit tradition holds that hiding such a secret may bring the camp ill fortune, hunger, lack of food or disease.

Infanticide, therefore, would have been a tragedy. However, when faced with desperate conditions, such as imminent starvation, families would sometimes abandon the infant in the hope that someone less desperate might find it before the cold or animals kill it. This mostly happened to female infants, since females do not normally provide food for the household. Moreover, their bringing more children would further shorten the food supply.

Prior to the 20th c. many European anthropologists believed Inuits routinely killed children born with physical defects because of the demands of the extreme climate. However, this view changed with the discovery of burials in the late 20th c. Between 1982 and 1994, several frozen bodies (known as “the frozen family”) were discovered at the Ukkuqsi archaeological site near Barrow, Alaska. Autopsies were performed and they were re-interred in the Imaiqsaun Cemetery south of Barrow. Years later, the body of a female child of about 9 years old was found in the same location who was clearly born with a congenital birth defect. She was never able to walk, but must have been cared for by family throughout her life. Radiocarbon dating of grave goods and a strand of her hair date the remains around 1200 CE.

European anthropologists writing in the early 20th c., such as Franz Boas and Knud Rasmussen, also write about the practice of senicide among Inuits. However, it is not clear to what extent these anthropologists’ writings are accurate, given their unscientific methods and imperialist interests. According to these accounts, old people who were a burden to the family would be put to death by abandoning them on the trail or by stabbing, suicide, hanging or strangulation. This was sometimes done at the request of the victim. If elders were killed this way, it was most likely mercy killing, since they are members of the family and valuable repositories of knowledge. There are also many taboos against sacrificing elders and murder.

The Inuit believe all things, including humans, have a form of spirit, which can interact with other spirits, including humans. The shaman (angakkuq) helps to interpret spirits and interact with them favourably. The shaman is not the leader, but a healer and therapist who tends wounds, offers advice and invokes spirits to help people with their lives. The shaman does not receive formal training, but is born with a gift for understanding or interacting with spirits. The community recognizes the shaman’s ability as it approaches adulthood.

Inuit religion consists of rituals that are tied to daily life. For instance, when a child is born the shaman places a small ivory carving of a whale in the baby’s mouth to make it good at hunting. Birth is celebrated with loud singing and drumming. Since all things have spirits, failure to respect them can cause them to act unfavourably toward people. The Inuit try to live in harmony with spirits, as the Inuit say: “The great peril of our existence lies in the fact that our diet consists entirely of souls,” which must not be disrespected.

Inuits especially associate spirits with water, which surrounds them in the form of the sea and snow. Inuits depend on water and food they obtain from it to survive. The waters are supposed to house many great spirits, most prominently the Spirit of the Sea (Sedna), since the sea plays a major role in the lives of Inuits. Like Sedna, the sea can be capricious, alluring, dangerous or bounteous.

The Spirit of the Sea

The Inuit have a rich body of lore which they share during the long winter months while waiting for caribou or by seals’ breathing holes. For instance, some Inuit see the spirits of their family and friends dancing in the aurora. Others warn against making sounds at the aurora, lest the spirits descend and dispatch the cause of their annoyance. Others see in the aurora spirits of animals, a guide to hunting or a spirit that helps the shaman heal others.